At VIRTUAL VEHICLE, the friction reduction potential of low viscosity lubricants for modern engine development and for future perspective is experimentally analyzed on an innovative engine friction test-rig.
In cooperation with RENAULT a 1.6 L downsized Diesel engine was tested on a highly accurate pressurized motoring test-rig to investigate the potential for friction reduction under realistic operating conditions including high engine loads. In contrast to fired engine operation, the pressurized motoring test-rig supplies air under pressure to the engine intake. In combination with the intrinsic compression of the engine, realistic peak cylinder pressures of up to 200 bar can be realized in the combustion chamber. This method has the major advantage of much higher measurement accuracy compared to fired engine operation which makes it perfectly suited for friction tests.
Altogether, three different lubricants and their impacts on engine efficiency are analyzed. The engine is originally specified to run with SAE 0W30 class engine oils. Therefore, a fully synthetic SAE 0W30 engine oil for Diesel engines is chosen as a reference for the evaluation of friction benefit. The second oil, a low-viscosity lubricant, is a SAE 0W20 engine oil with a similar additive package employed in the SAE 0W30 engine oil. The third engine oil presents an experimental ultra-low viscosity lubricant which is based on a polyalkylene glycol base stock.
The measurement results promise a friction benefit for low and ultra-low viscosity engine oils. The 0W20 engine oil shows a benefit of roughly 5 %. Using the polyalkylene glycol based ultra-low-viscosity lubricant, the friction loss is reduced by roughly 10% at motored condition and a notable efficiency advantage of up to 30% is observed under high load.
An implementation of the SAE 0W20 engine oil is comparatively simple as they are already available on the market and compatible with current engine designs. More difficult is the implementation of polyalkylene glycol based lubricants regarding its compatibility with engine components and its performance with contamination and ageing under fired engine operation. However, the promising efficiency benefit shows that both engine oils should be of interest for further investigations to increase engine efficiency.
The results are published in the open access article “Friction Reduction Tested for a Downsized Diesel Engine with Low-Viscosity Lubricants Including a Novel Polyalkylene Glycol” which is available online. 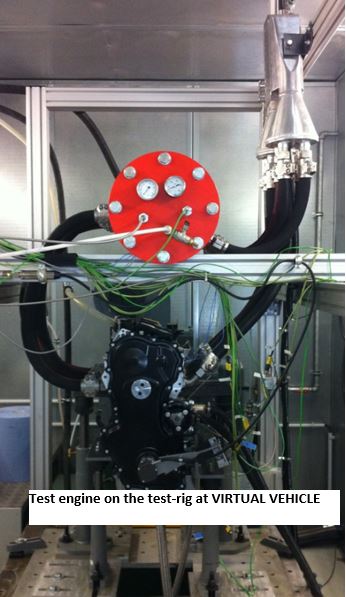